TV presenter and well-known face in the world of antiques, Eric Knowles is a recognised antiques expert and popular television personality. As a long running expert on BBC’s Antiques Roadshow and more recently presenter of Antiques Master, audiences benefit from his engaging style and ability to share knowledge in a way that is fun and easy to understand.

Eric is a Fellow of the Royal Society of Arts and director of Bonham’s. He’s a leading authority on European and Oriental Ceramics from the Seventeenth to the Twentieth Century, the glass of Tiffany and Lalique and Nineteenth and Twentieth Century Decorative Arts. Today he looks after museum liaison and several of his finds can now be seen in national museums.

Eric’s other television appearances include The Twentieth Century Roadshow, Crimewatch UK, Selling the Family Silver, Going For A Song, The Great Antiques Hunt, The Antique Inspectors, It’s a Gift and You Can’t Take It with You. He has been a resident antiques expert on This Morning and was a contestant on Celebrity Mastermind Christmas Special. He filmed the historical renovation series for Discovery Home & Leisure called The House That Mackintosh Built, property series Period Property and Restoration Man.

As a writer, Eric has published books on subjects such as Victoriana, Art Nouveau, Art Deco and Royal Memorabilia. He writes for The Sunday Times, is a frequent contributor to the BBC Homes and Antiques magazine and has written articles for the Evening Standard supplement, Home and Property and The Sunday Times’ Home. 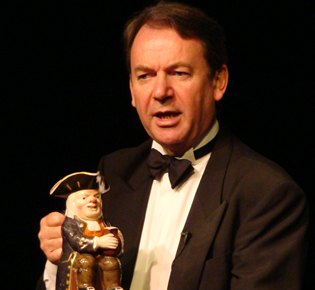