Colin Sell – Laughter in the One and Nines

Did you know there’s a connection between The Ghost Train and Dad’s Army? And that Will Hay’s sidekick, Moore Marriott, had different names for his different sets of dentures?  And that Carry On  actor Charles Hawtrey was also a gifted pianist? I’m Sorry I Haven’t a Clue’s Colin Sell has a right ‘carry on’ in his one man show with clips and anecdotes from British comedy films – no piano, but a full evening in the key of mirth with Hattie Jacques, Peter Sellers, Irene Handl, Alastair Sim, Margaret Rutherford and many more, sharing his love of the old British rib-ticklers. A nostalgic look at our golden age of cinema with laughs from the 30s to the 60s – plus a surprisingly clever canine from 1911!

Colin Sell is a British pianist who has appeared on the radio panel games “Whose Line Is It Anyway?” and “I’m Sorry I Haven’t A Clue.” He has become famous mostly for his long service on the latter show.

He was born on 1 December 1948 in Purley, Surrey, and grew up in Croydon. He did not get a degree in music but instead received a BA in Spanish and Latin American Studies from the University of Bristol in 1971. He wrote music for the University’s revues in the early 1970s, leading to performances at the Edinburgh Festival Fringe, where Simon Brett saw Sell perform and offered him the pianist position on Clue. He also appeared with the Yvonne Arnaud Theatre TIE company in the early 1970s, which included two other well-known names, Elizabeth Estensen and Clive Hornby, both long-standing members of the Emmerdale cast. 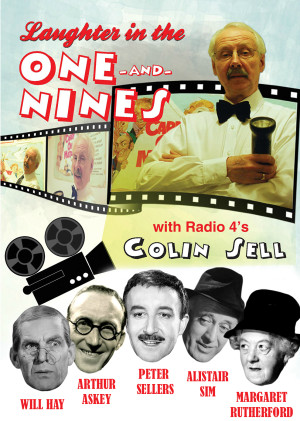