Clueless At The Keys

I’m Sorry I haven’t a Clue’s much maligned pianist Colin Sell talks and sings at the keyboard in an evening of anecdotes about his life in comedy and music – on radio, in cabaret and on stage, working with the likes of Barry Cryer, Willie Rushton, Dora Bryan and Nicholas Parsons among many. The ear-bashing challenges of accompanying Jeremy Hardy induce our sympathy, plus he describes the gorgeous world of Samantha, and the versatile radio skills (including silence!) of Humphrey Lyttelton. He also performs his own and others’ comedy songs – Flanders and Swann, Paddy Roberts and George Formby – and for a grand finale shares his fascination with silent cinema by accompanying a Buster Keaton comedy film: all in an attempt to redeem his reputation!

A “Sell” out success. The evening was a complete success! A warm, humourous and uplifting experience on a cold, dark December night. Colin Sell was a cooperative, collaborative artist who held the audience on his own for the first half which was full of music and anecdotes, considerable history and a few surprises including a chance to sing along! Gayle Taylor – Waverley Care

Many thanks again for a brilliant event last night. I thought it had such a wonderful feel to it and it was so heart-warming to put on something that involved so much humour, as well as lovely input from Firrhill and from the choir. Colin thoroughly enjoyed himself and really loved meeting you. Karen Docwra – Waverley Care

Thanks for inviting us to be a part of such a unique event. It was sheer entertainment from start to finish. Colin Sell was great and the silent movie section was genius…especially the improvised section. The Firrhill pupils were a delight and so talented. Liz Marr – Tartan Ribbon Community Choir

It was a pleasure to be part of such a positive event at Colinton church, the young people really enjoyed playing for the audience and we all liked meeting Colin Sell who is so talented, friendly and funny. Linda Innes – Firrhill Music

As a Radio 4 listener, I’m probably immediately categorized as ageing and middle class. In fact, Radio 4 has in recent years become the second most popular radio station in the UK with a much wider demographic than is popularly imagined. More and more young people now listen to Radio 4. On the other hand “I’m Sorry I haven’t a Clue” has been airing for over 40 years and our large community audience for the Waverley Trust fundraiser event perhaps largely reflected a more traditional demographic. Colin Sell himself has provided the keyboard accompaniment for more than 30 years. Being the butt of jokes about his musical abilities to which he is unable to respond having no microphone, he is perhaps the ultimate faceless and voiceless Radio 4 ‘celebrity’, which added to the interest of his live performance. Unlike the imaginary ‘Samantha’ who keeps the scores on the show, we discovered that Colin Sell not only exists but exudes the same quick wit as the main panel characters and combines this with extraordinary keyboard talent and an impressive capacity for improvisation, displayed during the accompaniment of the early Buster Keaton silent movie in the fashion (so I’m told!) of the 1920’s cinema. Colin Graham – Colinton Connections

Colin Sell is a British pianist who has appeared on the radio panel games “Whose Line Is It Anyway?” and “I’m Sorry I Haven’t A Clue.” He has become famous mostly for his long service on the latter show.

He was born on 1 December 1948 in Purley, Surrey, and grew up in Croydon. He did not get a degree in music but instead received a BA in Spanish and Latin American Studies from the University of Bristol in 1971. He wrote music for the University’s revues in the early 1970s, leading to performances at the Edinburgh Festival Fringe, where Simon Brett saw Sell perform and offered him the pianist position on Clue. He also appeared with the Yvonne Arnaud Theatre TIE company in the early 1970s, which included two other well-known names, Elizabeth Estensen and Clive Hornby, both long-standing members of the Emmerdale cast. 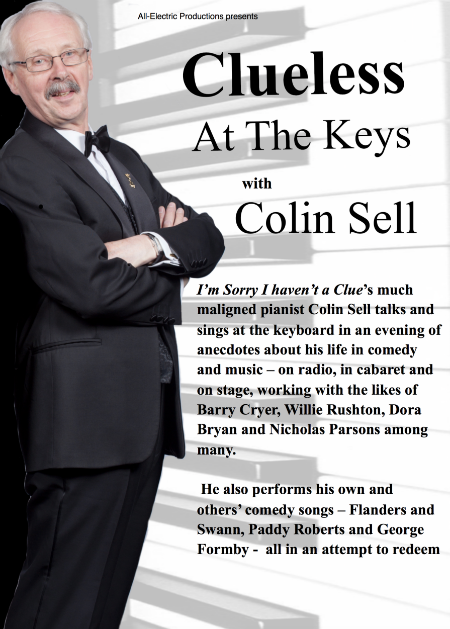