Theatre Productions > Special Interest > From Captivity to a Castle

From Captivity to a Castle

From Captivity to a Castle is the hazardous and colourful story of Tom Hart Dyke, plant hunter, who first shot to international prominence in the year 2000, when he was kidnapped in the Colombian jungle on a plant hunting expedition that went dangerously wrong.

On the day the guerrillas told him he would die, he planned a world garden for his ancestral home Lullingstone Castle, Kent.

Since his release from captivity, Tom has been busy building the ‘World’ in his back garden at Lullingstone Castle. Under the watchful eye of KEO Films/BBC, the man, known locally as ‘The Plant Nut’, has been filmed commandeering his Granny’s 18th Century Walled Garden, within the grounds of the Castle, to create his jungle dream.

Today that garden opens its doors to thousands of visitors from all over the world.

The story of this capture and subsequent plant hunting expeditions to develop his World Garden into what it is today, is told with passion and great humour.

…‘the Chris Packham of the plant world’

‘The new David Bellamy’  – The Guardian 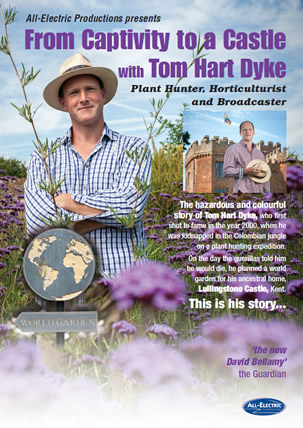