The Making of “O’Shea’s Big Adventure”

Mark O’Shea has conducted biological fieldwork and snakebite research projects in the Tropics since the early 1980s and has been involved with television since 1986.

Following years of working behind the scenes of natural history documentaries for the BBC and other channels, including on-location filming in Sri Lanka and Papua New Guinea, he was invited to move to front of camera for a film about anacondas in Venezuela, for Discovery Channel.

The film was entitled “Giant Snake” and was followed by three invitations to make films for the Channel 4 adventurous documentary strand “To the Ends of the Earth”, he made “Black Mamba”. Mark was then offered a six-part mini-series that became a 13-part full series, followed by a second series.

At the onset of ‘OBA’ Mark decided he wanted to reflect genuine biological fieldwork and that meant not only the thrill of success but also the disappointment of failure – the downs as well as the ups. The ‘Number One’ OBA Golden Rule was “No Set-ups”! There would be no set-up captures, no captive or pre-caught specimens in reserve in case the elusive ‘quest’ species failed to materialise, not even retakes of genuine captures if the camera stopped running, sound was compromised or the presenter (Mark) made a hash of it, and no choreographed captures to make the presenter look good on camera.

Another aspect he wanted to promote in ‘OBA’ was that it was not necessary for a species to be Big or Dangerous to be an interesting ‘quest’ species and although they made films about pythons, king cobras and Komodo dragons, it was not their size or danger they were highlighting. Even small reptiles could become quest species and they made films about the 3 inch luminous lizard of Trinidad and the 3 inch green-blooded lizards of New Guinea.

Blood, Sweat and Snakebites tells the story of the making of these films, the successes, the failures and the important scientific discoveries they made en-route. It also takes you behind the scenes and shows how Mark and his crew lived, worked, travelled, slept and ate on the filming expeditions.

Searching for and filming elusive wildlife in spectacular and remote locations is challenging and sometimes dangerous but it certainly allows you to appreciate the Natural World we live in and what it takes to bring it to your screens. 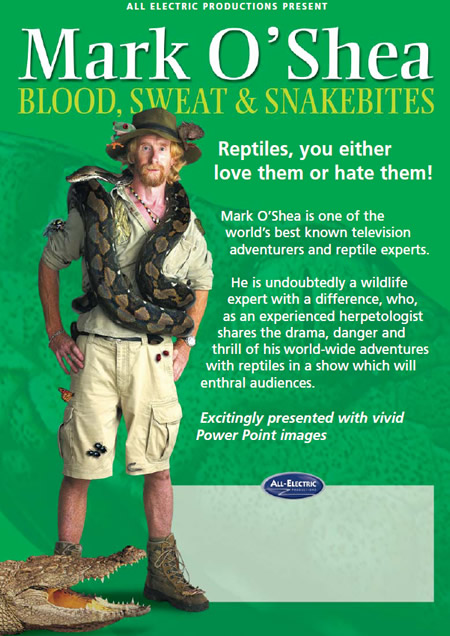